My last attempt baking Chiffon cake was in June 2009. 4 years later, I tried baking this cake again. Obviously, my yesterday's attempt was not as successful, because when doing unmoulding, the cake came out a little off on the top. It shrunk a lot compared to when the cake was baking in the oven. Other than that, the texture and taste of the cake are within my expectation, soft, fluffy and a mild pandan fragrance. This time round, I didn't use <a href="http://auntyyochana.blogspot.sg/2007/05/pandan-chiffon-cake.html">Aunty Yochana's </a>recipe but one from <a href="http://en.christinesrecipes.com/2011/06/pandan-chiffon-cake.html">Christine Recipes</a>. This Christine's Recipe used only 5 eggs, so I thought this should be better.

I'm glad I have used this recipe, as the yielded results was good.

Our Life's Journey Together 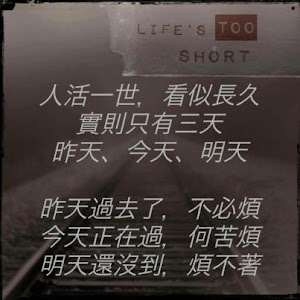 Esther
Do not dwell in the past, do not dream of the future, concentrate the mind on the present moment. ~~ Buddha

I Love to Read

This work by Bits & Pieces of Life is licensed under a Creative Commons Attribution-NonCommercial-ShareAlike 3.0 Unported License.